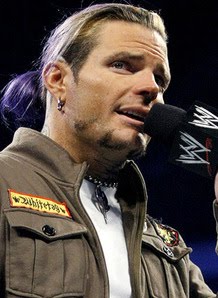 Well, it looks like CM Punk was right all along. The storyline between Punk and Jeff Hardy was based on Punk living a straight edge, drug-free lifestyle while bringing up how Hardy has been suspended for wellness violations related to drug use on a number of occasions. Sadly, after only 2 weeks of Hardy taking a break from WWE, he’s been busted on numerous counts of drug possession ranging from steroids and somas to cocaine and other drugs.

We posted a couple of years ago about Jeff Hardy’s drug suspension that got him removed from the WrestleMania 24 card, and how I didn’t believe Hardy would get another shot at holding the title. Lucky for him, I was wrong, and Jeff has had title runs, and has been a main eventer for WWE for the past couple of years. But yet again, Jeff screws up and screws up big time. This guy is going down the wrong path, and no one is going to be able to make excuses for him anymore, he’s just screwed up too many times.

Jeff was arrested but has since been bailed out, and of course, is on his Twitter saying how the media doesn’t have the facts and it’s not all true, but come on, TMZ has posted the reports, talked to officials, etc. Jeff can deny all he wants, but he’s royally F’ed up his career, and I think it’s doubtful we’ll see him back in WWE any time soon, if ever, since he just can’t keep things straight. The guy is being charged with intent to sell drugs? Really? A WWE main eventer needs to sell drugs just to pay the bills? What a waste of talent, but what else can be done. Here are a few reports on the arrest:

“Jeff Hardy — one half of the WWE tag team duo The Hardy Boyz — was busted today after cops found a boatload of pills and steroids inside his home. The Moore County Sheriff’s Office executed a search warrant at Hardy’s home in Cameron, NC today — where they found 262 Vicodin pills, 180 Soma pills, 555 milliliters of anabolic steroids and a residual amount of powder cocaine. Cops say the estimated street value of the drugs: $2,500.Hardy was arrested on charges of “trafficking in controlled prescription pills” and possession of anabolic steroids.Chief Deputy Neil Godfrey told us Jeff’s brother posted bail, which was set at $125,000.” Source: TMZ.com

“For the record, Matt didn’t bail me out, loan me money, or is his name on anything.. He’s just learning about today’s situation..”

“The media is the media, I wish they would at least report the story correctly & accurately. I will make a statement later.”