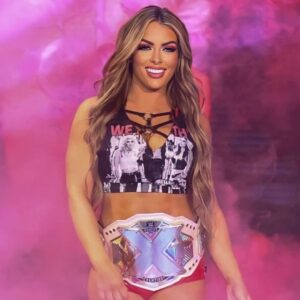 If you watched last night’s episode of NXT, you saw longtime NXT Women’s Champion Mandy Rose defeated by 21-year-old Roxanne Perez for the title. If you were questioning why Rose’s over-year-long reign with the title seemed to end so abruptly on a weekly episode of NXT, we might now have an answer. WWE has released Mandy Rose and it appears to be due to Mandy’s explicit content member site.

A couple of months back, just as Triple H took the creative reigns of the company, it seemed like numerous talents were returning to third-party platforms which Vince McMahon had banned. WWE stars having accounts on Twitch, Youtube, etc., seemed to be OK again. It REALLY seemed like change was at hand when Mandy Rose opened a member site and began posting explicit content.

While some female talent who had been on OnlyFans closed those accounts when returning and/or debuting with the company, Mandy Rose was opening a similar site but using her own domain name. It seemed like WWE just didn’t want to be attached to the OnlyFans stigma since Rose was openly going topless and even began posting intimate with her fiance (former NXT talent Tino Sabbatelli.)

It all seems to have come crashing down now as WWE has ended Mandy’s reign and released her from the company. The real point here is that Mandy must have been making enough money with her site to risk her WWE pay or else she could have just closed it down. This may present a problem for WWE in the future since many of the women will have the option to go this route and earn big money without putting their bodies at risk like they do in the ring.

So where does Mandy Rose go now? She truly reinvited herself in NXT with Toxic Attraction, becoming quite the in-ring performer and having a memorable run as champion. AEW is obviously more open to their talent making money on the side, so that could be an option if there is interest. Of course, Mandy will no longer be limited as far as adult content and could go more full-time into that world as well.