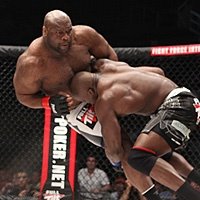 Earlier tonight, Bobby Lashley had his fourth MMA fight, but this time, he faced a well-known name for the first time in Bob Sapp. The collision was set to be an epic encounter from the minute it was announced. Lashley has pretty much dominated every opponent he’s had so far, and defeated most quickly. It was pretty much a lock, that Lashley would not dominate this fight, as for the first time he would not be the bigger fighter against the over 300 pound Sapp…but everyone was wrong.

The bell rang, Lashley took Sapp down and beat him until he tapped out. That’s right, Lashley made Sapp tap out to punches. Sapp is not the most respected MMA fighter, being he does a lot of comedy-style events and fights in Japan, and his style involves rushing guys and punching them without much discipline involved, but still, after defeating a well known Sapp, Lashley is moving closer and closer to being recognized in the MMA world as the real deal.

With Affliction, Strikeforce, and of course, UFC representing the top fight companies in the U.S., many are calling for one of them to sign the now 4-0 Lashley. Of course, given Lashley’s WWE background, the Lashley vs. Lesnar fight is already being talked about, and while it’s very premature for that, if Lashley keeps up his dominating streak going, he’s going to end up on the big MMA stage. Sapp will most likely go back to Japan, where he’s a huge star, and keep on making huge money in endorsement and even more fighting events, but it’s doubtful anyone will take him seriously here in the U.S. again as far as MMA goes.