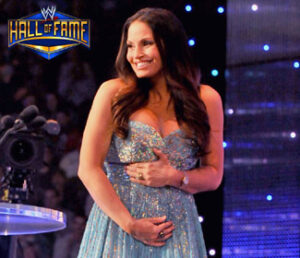 Congratulations are in order as newly inducted WWE Hall of Famer Trish Stratus saved a little surprise for her induction speech over the weekend, as she announced she will be “delivering a little…Stratusfaction” this September.  Trish is indeed pregnant with her first child and the timing couldn’t have been better to make her Hall of Fame induction even more special.

Of course with Trish’s induction and being the fact that she is only 37 years old, any talk of a “surprise” this weekend would have had to do with her returning to the ring.  It’s obviously going to take a little longer now, but Trish’s inductor Stephanie McMahon as well as Trish herself made reference to having at least one more match in the future.

Trish is without a doubt an innovator in the Divas division that deserves to be in the WWE Hall of Fame, and it was very cool for her to save something special under wraps until her induction.  Congrats to Trish Stratus and her husband Ron.