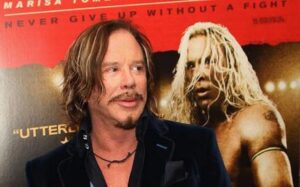 Ever since the movie “The Wrestler” came out, the critics have raved and the critics and people within the wrestling business have praised the movie, but it wasn’t until the award nominations and victories started pouring in that WWE was turned on to the movie, and they are actually promoting it now, which makes sense for both sides, given the amount of publicity the movie is getting. But now WWE has stepped it up and has plans to bring in the movie’s star Mickey Rourke on to their grandest stage, Wrestlemania 25.

While attending the SAG awards, Rourke announced that he had accepted Vince McMahon’s invitation to Wrestlemania, and is coming after Chris Jericho. Now the Jericho mention seems kind of random, so maybe Mickey let things out of the bag sooner than he was supposed to, but the minute he mentioned it, the sparks flew and so did rumors.

Earlier tonight on RAW, Jericho addressed the situation and mentioned Ric Flair by name as also being involved with this Rourke confrontation. So now the question is, what’s in store for Mickey Rourke at Wrestlemania? Could we see Randy “The Ram” Robinson become a reality and enter the WWE Universe and step into the ring and take on Chris Jericho at WWE’s biggest event of the year? Or are we simply talking about a small angle between Rourke and Jericho similar to last year’s Snoop Dog involvement at Wrestlemania 24? Hopefully being it’s only January and already WWE is planting the seeds for a major confrontation with Jericho and Rourke, we will actually see Rourke put on the tights one more time, take on Chris Jericho in a match, and possibly see Ric Flair either in Rourke’s corner or maybe as the guest referee for the match.

This match would be perfect for Wrestlemania as it most definitely has that “special” feel to it that many Mania matches have, and Chris Jericho is the perfect guy in the role as a veteran who is great and can have a decent match with Rourke, who has trained with Afa of the Wild Samoans, so he can definitely follow Jericho and pull off an entertaining story and match.

With WWE giving us some great long storylines right now, many of which will all come to a head at Wrestlemania, this added attraction match could be an awesome added feature match if WWE can pull it off.