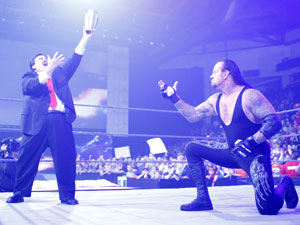 Tonight on Smackdown, WWE actually pulled off an unexpected surprise as Paul Bearer returned and rejoined The Undertaker in his feud against Kane.  We say unexpected because at the moment it seems like WWE is so stuck in the “youth movement” with only rookie characters being brought on board and pushed.

Paul Bearer is of course the legendary manager of The Undertaker, dating back to 1991; WWE rarely brings back an old character so I have a feeling The Undertaker himself probably had some backstage pull with this one.  The angle went over well and Bearer got a great reaction – it makes perfect sense for Bearer to return and rejuvenate ‘Taker after his loss to Kane at the last PPV.

The last time we saw Bearer he was in a concrete crypt and “killed” by the Undertaker himself; the angle didn’t make much sense at all and really was just to get Bearer out of the picture for some reason.

Now Bearer is back in his rightful spot and adding another dimension to Undertaker and Kane’s current feud.  Whether he lasts long is anyone’s guess, but to see A. a manager and B. a WWE legend back in a big role is a nice change of pace to what WWE has been giving us lately.