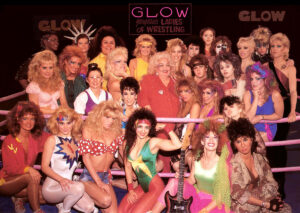 If you were a wrestling fan in the 80s, you no doubt either watched or have at least heard of GLOW (Gorgeous Ladies of Wrestling.) GLOW was an all-girl wrestling show that was syndicated across the country right alongside wrestling giants of the time like the WWF, NWA, and AWA.  But GLOW just wasn’t any plain old women’s wrestling promotion; those that watched it knew it was like nothing wrestling had ever seen.  These ladies were setting a standard before the term “Diva” or “Knockout” were even thought of, and had quite a story in the process of making it as far as they did.

The documentary “Glow: The Story of the Gorgeous Ladies of Wrestling,” tells the entire story of how it came together and talks to many of the show’s stars.  Mt Fiji, Matilda the Hun, Godiva, Tina Ferrari (who later became WWE’s Ivory,) Little Egypt, Hollywood and Vine, and Americana were just a few of the names that really give you an idea of how diverse the characters on this show were.  If that’s not enough, just take a look at the now-famous GLOW intro that included a group rap (hey it was the 80’s):

That intro might give you an idea of what was so different about GLOW.  It wasn’t just women’s wrestling; it was way over the top characters, it was comedy skits in between the matches, it was a ring with pink ropes and neon signs,  it was in a word…FUN.

This show obviously never took itself too seriously; its tongue-in-cheek humor was a welcome change at the time, especially for a kid like me who turned on this show and saw all these crazy cartoony characters.  There were clearly defined “good girls” and “bad girls,” and every one of them had a character of some sort.  Some may have not appreciated it at the time for its campy nature, but now many look back at GLOW as one of the most unique shows in wrestling history.

The documentary below is very well done, and not only tells the story of GLOW from the performers themselves but also catches up with what many of the girls have done since.  The highlight is the GLOW reunion organized by Little Egypt which sees many of the girls reunite for the first time in 20+ years.  If you were a fan from that era or just enjoy wrestling documentaries this one is definitely worth viewing and it is now available free on Tubi.