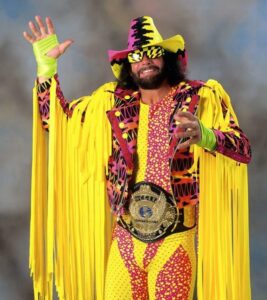 Legendary Wrestler and Slim Jim meat stick endorser Macho Man Randy Savage is Dead. Our friends over at TMZ are reporting that Macho Man died in a car crash.

This is sad news for not only hardcore professional wrestling fans but for anyone with even a passing interest in wrestling as WWF fans during their childhoods in the 80s/90s or just a general awareness of pop culture. Randy Savage, as Macho Man, had one of those outsize personalities that transcended the role of his character in the ring. For me, he was probably in the top 2 of all WWF wrestling personalities during my childhood, and he was featured in my favorite match of all time at Wrestlemania 3. If you check the current reactions on Twitter and the blogosphere, you will find a lot of guys expressing that same opinion.

According to Florida Highway Patrol, Savage was driving his Jeep Wrangler when he crossed the median and ran into a tree. Fortunately, his wife survived. I’m sure we will have more to say later.