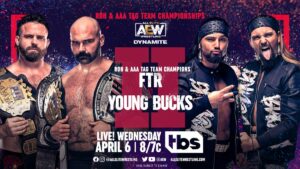 If you’ve been keeping up with the online buzz about some of the classic matches that have taken place recently, The Young Bucks vs. FTR from AEW Dynamite is at the top of most lists. With so much wrestling on TV and PPV these days, it’s hard to keep up with it all, so PWR is staying on top of that matches that are simply “must-see.”

For those that have followed the FTR vs. Young Bucks feud, you know they’ve been building this feud themselves before FTR even left WWE. If you haven’t followed these two teams’ feud, you were probably a bit blown away to see two actual tag teams having this level of match since it’s been a while since tag team wrestling has been done on this level.

The Bucks and FTR’s first match happened during the pandemic, which meant it didn’t have the benefit of a full crowd, unlike this second encounter which had an electric Boston crowd. To add even more to it, the fact that FTR’s AAA and ROH Tag Team Titles were both on the line made this even bigger and was a big reminder that here in 2022 we have all of these major promotions working together.

Dax Harwood and Cash Wheeler getting the type of reaction seen below, as the old school badasses against the over the top heel Nick and Matt Jackson really felt right, to the point that even Jim Cornette who has been The Bucks’ biggest critic (as well as AEW’s for that matter) even loved this match.

While AEW may be a bit all over the place at times, they pulled it together for this one, so I’m labeling the Young Bucks vs. FTR 2 as a PWR Must-See Match – check out the highlights below: