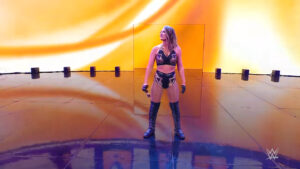 SmackDown saw Triple H’s run of bringing back former talents that he helped mold in NXT continue but this time we went back to the very early days as Emma returned to the company.

Emma (Tenille Dashwood) was released from WWE 5 years ago and has competed worldwide since. It was great to hear the commentators mention Emma’s match with Paige that really put the NXT Women’s Division on the map and they also didn’t shy away from talking about her release and competing elsewhere. While Paige gets the majority of the credit for the early portions of the “Women’s Revolution,” Emma deserves a similar level of recognition for her role.

Emma’s return was as a surprise challenger to SmackDown Women’s Champion Ronda Rousey’s open challenge. While no one expected Emma to win, it was a competitive match and got her back in front of WWE fans after her lengthy absence. Emma may be one of the first cases of a talent getting called up to the main roster and getting lost in the mix – Vince McMahon’s vision for “Emmalina” certainly was miles off course for what she was for NXT, as apparent by the “makeover” being ditched after one appearance.

Below are the highlights of Emma’s WWE return, including her post-match interview where it definitely sounds like this was not a one-time appearance:

Emma says that she was thrilled to be back in front of the WWE Universe on #SmackDown, and that after five long years she back to take on the best. pic.twitter.com/rGpw3ut0O4