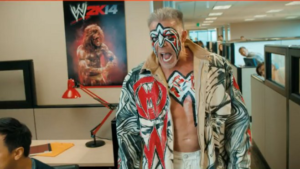 For the past few years, the yearly WWE game has featured a surprise star in the game as a pre-order bonus.  The Rock, Brock Lesnar, and last year Mike Tyson have all been big incentives to buy the new game over the last few years, and now WWE’s first game by 2K will feature one of the most popular legends of all time as the pre-order bonus…..the one and only Ultimate Warrior!

Now The Ultimate Warrior has been featured in a couple of games over the past few years but not in this exact series; while it is no doubt cool to have The Warrior in the yearly series, the real kicker is that the man himself is featured in the first commercial for the game – his first work on a WWE product in 17 years!  The commercial is awesome since it brings the same intensity the Warrior always did in his prime in WWE.  It’s very cool to finally see him taking part in a project like this since he obviously was one of the top guys in WWE for a whole generation.

Of course, as soon as this commercial was released, the rumors swirled of a return to WWE for The Ultimate Warrior, but ultimately this is a deal with 2K for the video game and nothing else at this point.  Of course, the fact that Warrior is working on anything involving WWE is a step in the right direction and will hopefully lead to the Warrior’s rightful induction into the WWE Hall of Fame.

Here is the new commercial for WWE 2K14 featuring the Ultimate Warrior!  Don’t forget to pre-order above and get the Warrior as an in-game character!