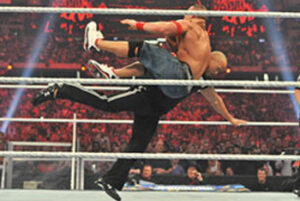 If you missed Monday Night RAW last night, yes you are reading this headline correctly.  For the first time ever, the main event for WrestleMania has been booked and announced a year in advance.  At the conclusion of WrestleMania 27, there was definitely a feeling that things between The Rock and Cena were far from over, but now it is confirmed that John Cena vs. The Rock will officially be the main event of WrestleMania 28.

Now the question must be asked, is The Rock now gone from WWE until the 2012 Road to WrestleMania begins?  If so, it looks like Cena will go back to feuding with The Miz for the WWE Title for the time being.  Leading into WrestleMania, a Rock/Cena match was even rumored for Summerslam (which would’ve made a lot of sense time-wise) but it looks like they are going with the year-long buildup approach.  It will be interesting to see how the build goes over the course of the year, and they better hope no injuries occur before then.

WrestleMania 28 will be in The Rock’s hometown of Miami, which should make for an electric atmosphere crowd-wise.  There is even talk of Triple H vs. The Undertaker 3 going down at this event, which would make this card even more unique.  Never before has such an advance card been announced, but it will be highly interesting to see if the concept actually works.