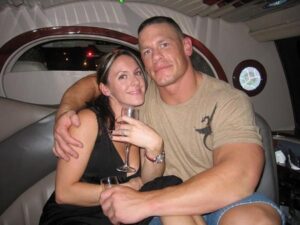 Well, this news won’t do much to John Cena’s do-gooder image.  Today TMZ has been all over reporting the fact that John Cena has filed for divorce from his high school sweetheart Elizabeth Huberdeau.  The marriage only lasted 3 years and seemed like something Cena never brought up (except a couple of months ago when The Rock brought it up in a promo, ouch.)

The bigger story here is that it looks like it will be one of those complicated divorces that will be covered by the media for a good while.  Apparently, Cena had his soon-to-be-ex sign a prenup in 2009, but she’s hired the same big-time lawyer Linda Hogan used to battle Hulk in court to fight things and make sure she gets her just due.  It remains to be seen if this gets nasty with allegations and such like the Hogan trial did.

It’s hard to imagine that Cena even had a marriage all this time, as his notoriously insane schedule doesn’t sound like it allows for much of a personal life at all.  It’s always come across that Cena was more married to WWE itself.  With WWE getting back to a little bit more realism in their stories, it’s probably only a matter of time before someone cuts Cena on the mic over this issue.