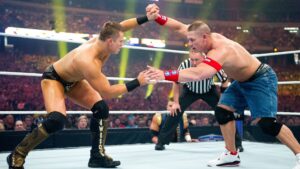 WrestleMania 27 has come and gone, and while there has been a mixed reaction to the show, I thought it was probably the best Mania in a few years.  Here are the results along with my take on the matches:

*Note* Daniel Bryan vs. Sheamus was bumped off the main card and was instead a dark match featuring lumberjacks.  The lumberjacks got involved in the match so Teddy Long made it a battle royal, which was won by The Great Khali.

The Rock came out and cut a promo to kick off the show, pretty much the usual Rock promo to get the fans ready.

Edge defeated Alberto Del Rio – Surprising opener here, but a great back and forth match that saw Edge win via spear.  Was hoping to see Del Rio take the belt, but I still feel he will in the near future.

Big Show, Santino Marella, Kane, and Kofi Kingston defeated The Corre – throwaway match as expected, The Corre was squashed and the whole thing was pointless.

Randy Orton defeated CM Punk – Decent enough match here, Punk is really on lately.  Punk springboards in but is caught in the RKO for a great-looking finish.

Michael Cole defeated Jerry Lawler via reverse decision – The in-ring action here was OK for what it was, basically a build for the crowd to see Cole get beat up.  Austin stuns Swagger, pushes Cole into Lawler, Lawler decides to win the match with the ankle lock.  The anonymous RAW GM steps in and reverses the decision due to Austin’s interference.  This story definitely isn’t over.

The Undertaker defeated Triple H –  I mentioned in my WrestleMania 27 preview that this match would have a big-time feel, and it did.  I wasn’t overly hyped about it going in, but as the match went on, it became a classic.  Many near falls, great drama, and Triple H hitting the tombstone on The Undertaker got me for a second, I thought the streak was ending.  After locking in the “Hell’s Gate” submission, The Undertake is now 19-0.  The Undertaker was stretchered out after this, selling the point that Triple H had done more damage than anyone else along the streak.  This was THE match of the night in my opinion.

John Morrison, Trish Stratus, and Snooki defeated LayCool and Dolph Ziggler – This was short, but Snooki pretty much shocked everyone in the little she did.  She executed a backflip handspring elbow that had to be seen and got the pin on Michelle McCool.  This will be all over the media, so this match achieved exactly what it needed to.

The Miz defeated John Cena – The crowd really wasn’t overly into this, only because they hated both Cena and The Miz.  The two were counted out, which of course led to The Rock coming out and restarting the match.  As they got back in the ring, The Rock ended up hitting the Rock Bottom on Cena, and Miz scored the pin.  The Rock came back to the ring and laid out Miz to end the show.  DEFINITELY more to come here, probably matches that will see The Rock vs. The Miz and The Rock vs. Cena possibly at Summerslam.

Overall I enjoyed the show, and they threw many extras in throughout the night such as the Rock and Stone Cold face off backstage which was awesome to see.  I think RAW will be a good one and will give us an idea of the new direction things will take post-WrestleMania.