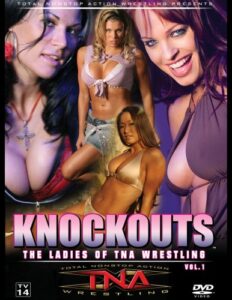 This news broke a little while back, and I’ve really had to sit down and observe what has become TNA’s biggest drawing attraction, the TNA Knockouts. Now when I think of Divas, Knockouts, females on a wrestling show, whatever, the WWE had set a standard that the women were just there to give us something to look at in between the matches. Later on, some divas like Trish Stratus, Lita, Molly Holly, and others brought a more serious wrestling aspect back to the diva segments on WWE programming. Now WWE seems to be looking for cookie-cutter females that can at least go through the motions of a match, and it’s making their divas seem very boring. Well TNA has taken things a different route and has produced a group of females that have been on some of the most entertaining matches and stories on the entire TNA Impact show, and the ratings are starting to show that the Knockouts currently bring in the highest ratings on the show! 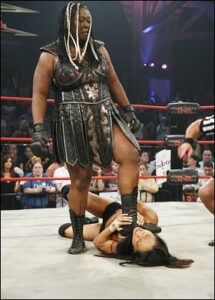 After viewing the Knockouts for a while now, I think the keys here are not only using girls that are GOOD and can actually wrestle, but they also have a diverse group of girls that are far from cookie cutter. I think when the monstrous Awesome Kong debuted months ago in TNA, fans could tell the Knockout division was in for a shakeup. Kong is the current TNA Knockouts champion and is probably the most dominant female wrestler that’s been seen in the past 8 years at least. Gail Kim was her main nemesis for a series of classic matches that literally still steal the show every time they happen. Gail is a former WWE Diva, who was good in the ring in WWE, yet released, for unknown reasons. The group also includes the larger than life ODB, who might be one of the all-time most outrageous female wrestlers, Christy Hemme, another former WWE Diva that was always full of energy, now in a rocker chick role as manager of the Rock N Rave Infection, Roxxi Laveaux, a knockout with a voodoo gimmick, who recently had her head shaved on PPV, and a tandem known as “The Beautiful People,” who have exploded on to the scene as 2 of the top heels in TNA. Angelina Love and Velvet Sky play the role of quite frankly, 2 blonde bitches, who think they’re hotter than everyone else, and the gimmick has delivered the big ratings for TNA. 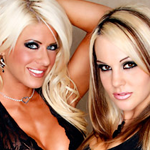 2 hot blondes who know it, talking much trash weekly, a 300-pound champion, a wild drunk female, a rocker chick, a hot Latina gangster girl, and many more, all in 1 episode of TNA Impact. Basically, they have such a hugely diverse group, I’m reminded of back in my day when I was highly entertained by a group of girls who had their own promotion, simply known as the Gorgeous Ladies of Wrestling! If you don’t know what GLOW is, Youtube it, it will be worth the throwback. If you do know GLOW, TNA is a beefed-up version with better wrestling, more realistic storylines, and hotter women. A few months back, I read TNA was thinking about giving the Knockouts their own 1-hour show, and now months later, I do not disagree. I actually DO enjoy it more than the regular stuff on TNA. 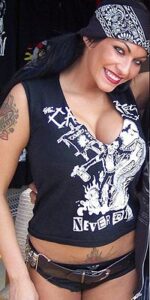 I don’t know if it’s sad that women’s wrestling is for the first time more entertaining than men’s, or if it’s good that we’re finally getting an awesome assortment of female wrestling talent that can get the job done. Word has it WWE is already interested in signing some TNA Knockouts, but unfortunately, they would probably try to conform them to their stale style, and would not be able to do what TNA is doing right now. If TNA doesn’t interest you, I”d recommend at least checking out the Knockouts segments. Awesome Kong is hugely entertaining in destroying people, and the Beautiful People are heat seekers big time. And don’t worry, there is PLENTY of eye candy to go around, just take a look at this assortment of pics in this post and you’ll see that TNA didn’t leave out the hot factor in their TNA Knockout selection.