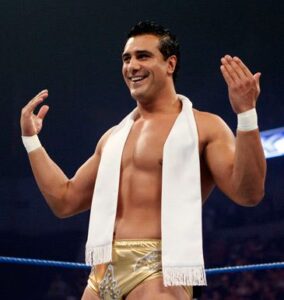 Since Alberto Del Rio’s debut last year, he has quickly made an impact and is already a major player in WWE.  Unlike most new talents these days who have to start at the bottom and work their way up slowly, Del Rio seemed to jump right into some major feuds and get a major push.  One major reason for this may be that, unlike most new talents that come from WWE’s Florida Championship Wrestling, Alberto Del Rio is no rookie in the wrestling business.

Alberto Del Rio is actually a 10 year veteran in wrestling, wrestling the majority of his career as “Dos Caras Jr.” around the world.  Del Rio is actually the son of Mexican wrestling legend Dos Caras, and the nephew of the legendary Mil Mascaras.  Del Rio even competed under his mask in Florida and in dark matches before finally unmasking for his new character.  Del Rio also has a legit MMA record of 9 wins and 5 losses, all of which were fought with the Dos Caras mask on.

As Del Rio has established himself as a major player in WWE, the signs are starting to appear that WWE is ready to elevate him to main event status.  This past Monday, many of us questioned why Alberto Del Rio randomly had a match on RAW against R Truth when Del Rio is a Smackdown star.  Well, no real explanation was given, but it was an attempt to get Del Rio over to the fans on RAW and hopefully want to watch him on Smackdown.  Then last night on NXT, Del Rio’s personal ring announcer requested to take his place in the battle royal, which booking-wise was a way for Del Rio to not have to lose and look bad in the match.

Del Rio’s first big feud has been with Rey Mysterio from the get-go, and with things likely wrapping up soon between the two, it’s a safe bet that Del Rio will be pushed as the rich, arrogant World Champion that everyone wants to see beaten.  It’s smart business, and Del Rio has the “it” factor to pull it off.  So don’t be surprised if Alberto Del Rio is the top guy on Smackdown within the next 6 months in my opinion.