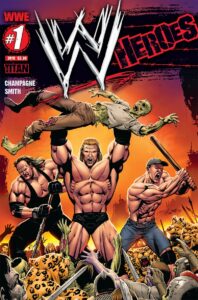 We were fortunate enough to receive a review copy of the new WWE comic book “WWE Heroes.” WWE releasing a comic book was a throwback to the early 90s for me, back when WWF had the old “Battlemania” comics which were a ton of fun. They featured the Ultimate Warrior, Undertaker, The Big Boss Man, and other 90’s stars. Those comics were a cartoony style that fit the era, and pretty much played alongside WWF storylines in the outside world.

The new WWE Heroes comic is similar in the way that it features WWE stars like Triple H, John Cena, and once again The Undertaker. This comic takes a more serious approach, with much more detailed art, and a much more serious story. The book highlights some WWE in-ring battles while switching back and forth between “The dawn of time” and the similarities between the battles then and the battles in WWE rings. The story revolves around a character called “The Shadow King” and ties in with the Royal Rumble winner taking on the champion at Wrestlemania. Some very creative stuff here, and a great collector’s item as well.

We’ve included the trailer for issue number 1 below, and you can order your own issue at wwecomic.com.