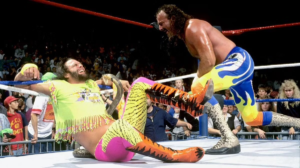 Today we’re taking a look back at one of the most memorable moments in wrestling history, largely because it hooked fans and non-fans, believers and non-believers alike. Yes, today we remember the infamous segment that saw Jake “The Snake” Roberts attack Randy “Macho Man’ Savage and unleash a live cobra on him.

Pro wrestling in 1991 still had many detractors that wanted to take the “it’s all fake” stance. Still, there were many defenders who wanted to hear none of it. One thing was for sure, the detractors definitely got an eye-opener when a live cobra was biting someone in a wrestling ring on TV. “Well, it had to be devenomized!” they’d argue – yes, but this was still a REAL snake biting someone in front of our eyes.

If you followed WWF at the time, you got to see the angle between Savage and Roberts begin at SummerSlam 91 during Savage and Elizabeth’s wedding reception. Jake and The Undertaker ruined the whole thing, Sid Justice saved the day, and new feuds came together after The Ultimate Warrior’s exit from the company. Sid would end up injured and out of action, so the “retired” Randy Savage had to fill the void. At the point of the cobra attack, Savage was still pushing for reinstatement following his loss to the Warrior at WrestleMania 7 in a retirement match just months earlier.

The pure chaos that erupted and the delivery of this entire thing was amazing – from Roddy Piper (who wasn’t even involved in this angle) getting up from the announce booth to help matters along to Vince McMahon losing his mind on commentary, it really gave a vibe that something “went wrong” and there was a real concern for Savage’s health.

One of the most interesting things about this angle was that it was taped on October 21, 1991, but didn’t air until over a month later – just days before Survivor Series in fact. Watching as it all unfolded back then, one might guess that this whole thing was a last-second ploy to get Savage in as the replacement for the injured Sid at the PPV, but the way things actually played out is another story for another time.

Below is the angle as it aired in many markets on TV which “censored” must of the snake bite, which may have added or taken away from the effect depending on how you look at it. And below that is the A&E piece on the segment complete with comment from Jake Roberts, Roddy Piper, and more: