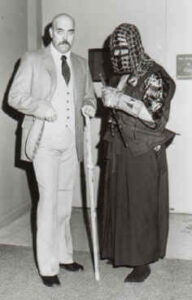 Wrestling lost another legend over the weekend and one that a lot of fans today probably missed out on. “Playboy” Gary Hart was a manager in the glory period of wrestling when managers really meant something. A lot of much-deserved shine goes to legends like Bobby Heenan, Lou Albano, Freddy Blassie, Paul Ellering, JJ Dillon, Jimmy Hart, Mr. Fuji, Jim Cornette, etc., and while Gary Hart never had a big run in WWE, he was instrumental not only as a legendary manager but one who made magic behind the scenes, a fact that we didn’t know a lot about until the recent release of the Heroes of World Class and Triumph and Tragedy of World Class Championship Wrestling, where Gary went into detail about his involvement in booking and being part of the office in Texas in those days.

As a manager, Gary always made me believe everything he said. He had a look to him that was straight out of a comic book, a true villain who was always scheming, and came off as a true mastermind. You saw him being able to control the likes of the Great Kabuki and Abdullah the Butcher (both pictured,) and he drew you in and made you believe he had traveled to the farthest reaches of the Sudan or Japan, and imported some new star, the likes of which we had never seen before, and he always delivered something spectacular to do battle with the likes of the Von Erich’s, Ric Flair, or Bruiser Brody. 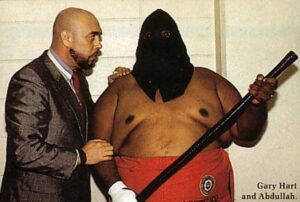 When he wasn’t in World Class, Gary had a good run as the manager of the J-Tex Corporation in the NWA in 1989, which was comprised of Terry Funk, and Gary’s newest find from the land of the rising sun, the Great Muta, who together had a memorable feud with Sting and Ric Flair throughout 1989. Muta was a sensation in the U.S., and I believe a major part of that was Gary Hart’s buildup for Muta as Kabuki’s son.

Behind the scenes, Gary is credited for seeing the potential in Dusty Rhodes as a face and labeling him “The American Dream,” and also behind Kerry Von Erich’s push to superstar level in the early 80s. In my opinion, Gary Hart was the highlight of the WWE’s World Class DVD, as even outside his role as manager, his speaking still drew you in, and made every story that much more entertaining. It’s sad to see another person that contributed to the GREAT days of wrestling gone, but if you’ve never seen any Gary Hart in action, throw on some DVDs of a period that Gary Hart was a part of, and I’m pretty sure you will see some great old school action, as I can’t recall a product that the “Playboy” was a part of, that wasn’t a top-notch wrestling show.