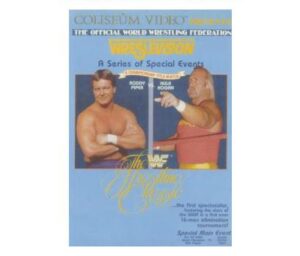 The Wrestling Classic, one of the first pay-per-views offered by the then WWF (aside from Wrestlemania 1) was held on November 7, 1985, at the Rosemont Horizon in Illinois.

Nowadays WWE has a monthly pay per view and just about everyone is meaningless and routine. The Wrestling Classic had the big-time feel of a truly special event. My first experience with the event was seeing it on video and the thing that grabbed my attention right away was the old-school cool Coliseum Video clamshell case that featured WWF Heavyweight Champion Hulk Hogan and Roddy Piper. This right there had me sold that out of ALL the videos to rent, this one would top the list as it guaranteed a match between the number 1 good guy, the Hulkster, and the number 1 bad guy, Roddy Piper. These 2 guys represented that era of wrestling, from the LJN wrestling figures to the Hulk Hogan’s Rock and Wrestling cartoon, all of it was about Hogan vs. Piper.

Now back then, you didn’t see Hogan vs. Piper every week on free TV, hell you didn’t even see Hogan or Piper wrestle on TV period aside from a special appearance or a Saturday Night’s Main Event, so the hype just by looking at the cover was huge. This event was also my first exposure to tournaments in wrestling, and I believe the first big one-night tournament the WWF held. The concept really hooked me, as it forced matches you wouldn’t normally see via “luck of the draw.” You would never see Ricky “The Dragon” Steamboat take on his friend Davey Boy Smith of the British Bulldogs, or two good guys (at the time) like “Mr. Wonderful” Paul Orndorff and Tito Santana battling to time limit draws, but you saw both of those matches here either due to “random draws” that made the first round pairings or in later rounds due to how the match outcomes played out. True excitement back then to think of the possibilities of dream matches you wouldn’t otherwise see.

Tournaments have lost that magic now of course, but the Wrestling Classic had it and produced great matches and moments. The finals came down to the Junkyard Dog taking on Randy Savage in the finals, and surprisingly the JYD prevailed and won the tournament via countout over Savage. As a bonus match, we got the Hogan vs. Piper showdown, which of course ended with Piper getting DQ’d as usual (Piper was never pinned in this era by Hogan) when Bob Orton interfered and Paul Orndorff made the save for Hogan.

If WWE runs this show on 24/7 again, I’d definitely recommend watching and re-living the fun era of wrestling. I’ve provided video below of the WWF title match between Hulk Hogan and Roddy Piper from the show.