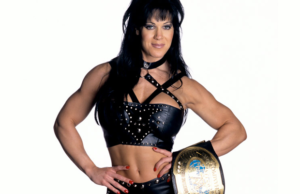 It’s been quite a year of loss for the wrestling world as some of the most iconic figures in wrestling are no longer with us. Many times the loss comes out of nowhere and there is a sense of utter shock when it happens; while not as shocking as some due to her condition over the years, today the wrestling world is mourning the loss of Joanie “Chyna” Laurer who has passed away at the age of 46.  Although Chyna has been in a bad place for the majority of the past few years, it’s been great to see the recognition she is receiving today for her groundbreaking achievements in pro wrestling.

Some fans from this era may have only heard negative things about Chyna from the later part of her life, but it cannot be denied that she played a major role and was an iconic figure in the Attitude Era.  I will always remember her debut – it was during a time when RAW was becoming a show you had to watch every week because anything could happen.  When this giant of a woman jumped the rail to assist Hunter Hearst Helmsley (Yes Triple H) her impact was felt immediately and a WWE Superstar was born.

>While the mere sight of Chyna made her a reputable bodyguard figure for Triple H, that was only the beginning of a career that literally saw Chyna do what no female had done before. From being an initial (albeit pretty much silent) member of Degeneration X to becoming an in-ring performer and being the first woman to enter the King of the Ring Tournament, Royal Rumble, AND become the first and only female Intercontinental Champion when she defeated Jeff Jarrett as No Mercy 99!


After the point of establishing that she could kick the men’s asses in the ring, Chyna changed her image and actually became one of the Attitude Era’s sex symbols – even posing for Playboy in 2000.  In 2001, Chyna became the WWE Women’s Champion as well to top off her huge list of accomplishments during her 4 year WWE career.

After WWE Chyna competed in a few matches for New Japan Pro Wrestling in 2002, and her latest major pro wrestling appearance was for TNA in 2011 where she seemed to be in good shape and a great fit on the show even though her run was short-lived.

Aside from her personal problems that have plagued her, the outpouring of respect for Chyna’s wrestling career has been massive with even top WWE brass Triple H and Stephanie McMahon commenting on Chyna’s contributions.  It’s a rare case that an attraction such as Chyna comes along, and her ability to excel in so many areas of the business is something that obviously inspired many as evident in the many stories and memories being shared today on social media.

The term “9th Wonder of the World” isn’t given lightly, and anyone that looks back at Chyna’s wrestling career years from now will see why.  One thing is for sure, even casual fans couldn’t help but be polarized by Chyna….”She could beat up the guys!”…..and she did.