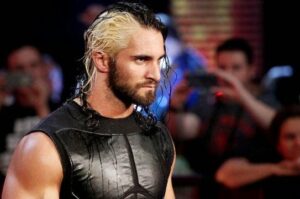 It’s been an interesting 24 hours, to say the least for WWE Superstar Seth Rollins; as RAW went on the air last night, Seth Rollins’ Twitter account was apparently hacked and nude photos of NXT developmental Diva Zahra Schreiber were posted on it. Following that disaster, things got even worse as Rollins’ fianceé saw the photos and proceeded to post nude photos of Rollins himself.

What will this all mean for Rollins’ current spot at the top of the WWE roster? WWE does try to push the whole family-friendly/TV-PG stuff, but this will probably not affect his current status being his account was hacked. This may cause a stir obviously in Rollins’ personal life since his fiancée was obviously none too happy about these pics being posted, but we’ll probably never know the back story on where they came from or if Rollins had any connection to Shreiber. Rollins’ fianceé’s Twitter account has since been deleted, so take that for what it’s worth; meanwhile, Rollins posted an apology to fans and his family for the leak.

Things may not bode as well for Schreiber’s future as she has yet to make her in-ring debut and was signed because of her obvious look and modeling history –  already having a bit of a dark cloud over her due to this scandal could put her on the chopping block before she even steps in a ring.  Obviously, she has the look to fit right in with the Divas, but we wouldn’t be surprised if she was released just to help sweep this situation under the rug so to speak.

Word is WWE has instructed the talent to not even address this situation as they obviously want to protect one of their top talents from further scrutiny, but this story is making headlines all over so it will be interesting to see if WWE and Rollins continue to ignore the story.  I guess if Rollins suddenly isn’t in the main spotlight every week like he currently is, WWE may be holding off a bit on his super push because of this. We have a feeling WWE just wants all of this to be over and doesn’t plan on acknowledging it at all – hopefully, that will mean Schreiber’s career will continue on because she looks like someone we’d like to see in the ring!