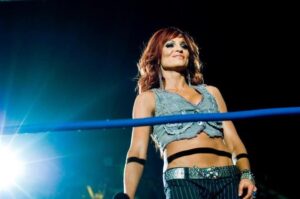 If you watched Impact this past Thursday, you saw a rather odd moment where ring announcer Christy Hemme made a mistake in announcing Austin Aries and Bobby Roode as their opponents Christopher Daniels and Kazarian.  The heel immediately reacted of course and hit the ring, with Aries forcing Hemme to correct her mistake and announce them again.  What followed in the next few seconds is what has people asking if Airies crossed the line.

Aries had Hemme backed into a corner when she made the correct announcement, and after she did, he proceeded to climb up the ropes over her….which pretty much put his crotch right in her face.  Now many are seeing this in different ways.  Some say this was obviously an unplanned spot and should be taken as sexual harassment.  Others say this was a typical wrestling “rib” in which someone gets a little heat for making a mistake.  Sure there are those who say women have endured much worse in various angles over the years, but those were all planned (and agreed upon) moments which make them totally different.

Some people are saying this was just plain wrong such as Mark Madden over at Wrestlezone.com, who thinks Airies should straight be fired for his actions.  Christy Hemme is a married woman now and no longer an active competitor in the ring, so it’s hard to say how she really feels about the incident.  Her only mention of it was on her Twitter page when she said it was “unacceptable,” but the tweet has since been removed so take that for what you will.

I believe Austin Aries actions were a spur-of-the-moment thing he didn’t put a whole lot of thought into.  I don’t think it was planned at all (even though some people think it may have been) and they probably moved past it pretty quick.  I’m sure neither Hemme nor Airies wanted to make it a bigger deal than it already is, but being it was on national TV it’s hard to avoid.  With the treatment of women and women’s rights being much bigger movements than they were years ago, actions like this won’t be ignored.  I’m willing to bet TNA never brings  the incident  up again and lets it fade away.

So here is the video of the incident; do you think it was sexual harassment or just another rib?