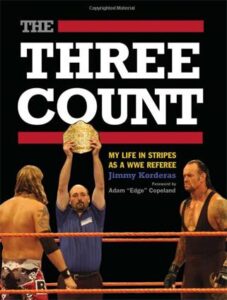 If you were a huge wrestling fan in the 80s, can you imagine being given the opportunity to work in the wrestling business at that time  around legends such as Hulk Hogan, Andre the Giant, and Randy Savage?  That’s exactly what happened to longtime WWE referee Jimmy Kordereas when his wrestling career started.  Jimmy tells the story of his journey in his new book “The Three Count: My Life in Stripes as a WWE Referee.”

I remember seeing Jimmy Korderas referee when I was a kid growing up in the 80s, as his name was mentioned quite often back in the day when referee’s names were mentioned more on commentary.  It was very interesting to read how Jimmy got involved in the business and how the iconic figurehead of the then WWF at the time, Jack Tunney, played a big role in Jimmy doing so.  Jimmy tells some great stories about being a fan and moving his way up in the business and being around many of the biggest stars of all time.

Mr. Korderas took part in multiple pay-per-views and of course WrestleManias, and has some great stories to tell from many of the events;  probably the biggest of which is the World Heavyweight Title  match Jimmy refereed at WrestleMania 24 between The Undertaker and Edge (who wrote the foreword for this book.)  Of course, with so  much time spent in WWE  comes great and sometimes hilarious road stories from his many years with WWE.

While the tone of the book is overall lighthearted, upbeat, and humorous at times, Jimmy was  also very close to some of the most tragic deaths in wrestling including Owen Hart, Eddie Guerrero, and Christ Benoit.  Many of you may not realize that Jimmy was scheduled to be the referee and was actually in the ring the night Owen Hart fell to his death.   Jimmy’s re-telling of the events  from the night  Owen died is a real eye-opener as he was unbelievably close to it all.  Korderas’s friendship with Eddie Guerrero and Chris Benoit also gives a behind-the-scenes look at what kind of men they were.

This book is great if you are looking for an unbiased look at the goings-on in WWF/WWE from the mid-80 all the way to the mid-2000s.  Jimmy traveled the world with WWE and truly has some fun stories to tell.  It’s a nice look at the inner workings and the role of a pro wrestling referee as well.  Ever wonder what it’s like for a referee to mess up a match and then have to face Mr. McMahon himself in the locker room?  You will find out what it’s like in this book.  Pick up your copy of Jimmy Korderas’s “The Three Count: My Life in Stripes as a WWE Referee” below: