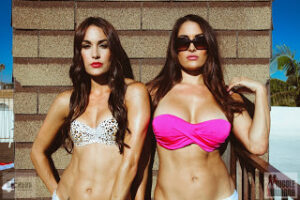 In what was a bit of a surprise on RAW last night, the Bella Twins made their return to WWE in a backstage segment with Team Rhodes Scholars and Kaitlyn. It’s been almost a full year since we reported the Bellas were leaving WWE and the angle where Eve Torres “fired” them to explain their departure occurred. Now the Bellas are back to aid what can only be described as a floundering Divas division.

We mention that the Bella Twins’ return is a bit of a surprise mainly because there had not been any rumors of their return, but maybe it’s not all that surprising since as far as anyone knows the Bellas are both still dating WWE Superstars. A few pics landed online a few months ago revealing that Brie Bella is dating Daniel Bryan while Nikki Bella is with John Cena. If those 2 relationships are indeed still in tact, their return to WWE makes a lot of sense.

The Bellas have always been a unique act and really could’ve done a lot more if they were given more of a spotlight. Of course WWE’s TV-PG stance holds a lot back, mainly the divas. Imagine if it was the Attitude Era and we still had bra and panties type matches mixed in with meaningful Diva matches, the Bella’s star would shine brighter than ever and they would no doubt get more notice.

Nikki and Brie Bella are back to hopefully bring some much needed interest to the Diva division. Oh, and if you had trouble distinguishing which Bella is which, one noticeable change will help you out now that the Bellas are back. Yes, Nikki Bella got breast implants during the twins time away, so just remember – Nikki is the one with the boobs!