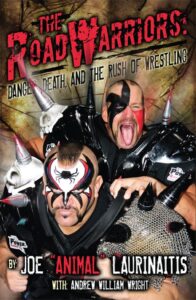 The Road Warriors are without a doubt one of the (if not THE) greatest tag teams in pro wrestling history. Finally getting a book on the Road Warriors career was awesome, and extra cool for me since I can say The Road Warriors played a huge role in getting me hooked on wrestling in the mid-80s. “The Road Warriors: Danger, Death, and the Rush of Wrestling” is written by Road Warrior Animal (Joe Laurinaitis) with Andrew William Wright, and features a foreword by “Precious” Paul Ellering which was a very cool touch.

The book is a nice overview of the “LOD’s” career, with Animal quickly getting through the early non-wrestling days since he realized that everyone really wants to hear about wrestling for the most part. If you have seen the Road Warriors WWE DVD, this is pretty much the written form of that with more details and stories mixed in. We first go into Animal and Hawk’s early days in wrestling coming up at the same time as other names such as Rick Rude, John Nord, Nikita Koloff, and Barry Darsow. Animal also tells the story of how he was paired with Hawk, and how their characters evolved over the years into the iconic look we all know. Later on, Animal even goes into how his brothers got into wrestling, one, of course, being “Big Johnny” John Laurinaitis.

Animal goes into more detail than he did on the WWE DVD about the duo’s trips to Japan, where they became iconic stars before they even arrived in WWE. I was actually a bit surprised that Animal didn’t spend more time on their initial WWE run, but overall while that run only lasted a couple of years. ItAroundhis time t, Animalivulges a lot of information on how Hawk’s substance problems became apparent.

One of the book’s best parts is the collection of rare Road Warrior photos from throughout their career. Being a LOD fan since the mid-80s, it was cool to look back at all the memories. As far as complaints go, there wasn’t much I can say I disliked. There were a couple of stories that didn’t quite add up or seemed a bit off time frame-wise, but the same could be said for almost all wrestling books.

Overall, if you are a die-hard Legion of Doom/Road Warriors fan, this is a great book to read. If you are more of a fan of the era itself, this book still has some great stories about all the big stars from the 80s and 90s. Reading the story of the only tag team to win the WWF, NWA, and AWA tag team titles in their career is without a doubt quite a ride. I waited many years for a book on The Road Warriors, and this book was an enjoyable look at the greatest tag team of all time.