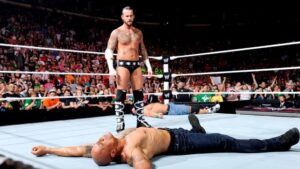 RAW 1000 was a huge show with a ton of surprises as expected, but there was the one standout story that ended the show and set the direction for the next few months.  Many would call the angle a “heel turn” by CM Punk, but an old school fan like myself can really appreciate how much it all made sense and how it could save CM Punk from turning into just another bland WWE top guy.

The initial portion of the story was Big Show interfering in Punk’s match with John Cena and knocking Cena out as Punk watched on while the ref was down.  Punk was left with the decision to attempt a pin and win the match or to “do the right thing” in the situation and inform the ref of what had gone down.  The delivery by Punk was great here, as the internal struggle over what to do was very evident.  Punk eventually went for the pin, but as it turned out he took too long and Cena kicked out at the last second.  The next part of this roller coaster was Cena locking Punk in the STF before Show once again interfered, causing a disqualification win for Cena.

As Big Show continued his attack on Cena, CM Punk was in the corner looking on as the announcers questioned why he wasn’t jumping in to help Cena.  This went on for a while as Punk continued to do nothing.  Eventually, The Rock’s music hit, and he hit the ring to aid Cena.  Then just as The Rock went for “The People’s Elbow,” Punk sprung into action and took the Rock out.  Punk then hit the “Go to Sleep” on The Rock and ended up standing tall as the night ended.

Of course, the crowd booed Punk after all of this, as it appeared he was once again a “bad guy,” but the real situation seems to be Punk acting like an old school champion would.  Punk did what he had to do to protect his championship, which only makes sense.  Then, as champion, Punk refused to let The Rock waltz in and steal the spotlight to end the biggest RAW of the year.  The WWE Championship gained a lot of prestige back during all this since The Rock announced he would be facing whoever is the champion at this year’s Royal Rumble.  Punk has had one of the longest reigns in years, and now he is starting to act like it.

Last year Punk was the rebel that said whatever he wanted, stood for change, and we all looked forward to any time he came to the ring.  In recent months, Punk became “just another top guy” who would team with Cena and just be your typical good guy.  Punk lost his edge, an edge we were thrilled to see back last night.  Ric Flair was the champion in the ’80s and ’90s that made his belt feel important because he would do anything it took to protect his number 1.  CM Punk brought back that notion last night, and it gave a glimmer of hope that real pro wrestling that makes sense can still make a comeback.