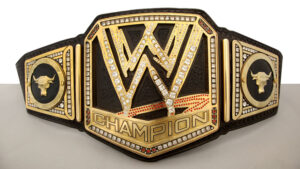 It’s hard to believe that we have had to endure 8 years of the horrific belt that has represented the WWE Championship.  Back when John Cena debuted a spinning United States Title around 2004, it was inevitable that he would also ruin the WWE Championship if he ever won it.  He won the belt and did indeed ruin it by making it a spinning rap-inspired “bling” belt that ONLY would’ve been suitable for his initial title run.  The worst part is every time Cena has lost the belt to someone over the years, that person used the belt as well without commenting about how bad it looked and how a new version was badly needed.  Thankfully The Rock finally fixed all that last night.

In his “championship celebration” last night, The Rock finally said all the things we’ve said about the belt for years: it looked like a toy, it took away from the title’s prestige, and a title belt should NEVER spin (they actually brought back the spinning version of the belt for this segment, but I believe an actually spinning version of the belt hasn’t been used for a few years now.  The Rock then officially retired the old spinner and debuted the brand new WWE Championship belt.

Now on to the belt itself.  We actually reported a first look at the new WWE belt last year, and as it turns out the pics were pretty accurate as far as initial design goes. The main plate features a giant WWE logo with “Champion” under it.  It’s a pretty straightforward approach and definitely isn’t the “bling-bling” look of the old belt.  The side plates feature Brahma bulls so it is apparently customized specifically for The Rock right now, although I would definitely think they will change when someone else wins it.

So the question is, is this belt better?  In my opinion it is, but I wouldn’t consider it GREAT.  I have lived through many versions of the title (Hulk Hogan had 4 versions throughout his initial title run from 1984-1988,) so I may be biased toward the more traditional look.  This belt seems to feature more leather than gold on the main plate, which is definitely a different approach.  I also like the old “global” style belts that got the message across that the champion was a world champion, this belt sends a definite message that it’s all about “WWE” as the giant logo tells us.  I can’t complain too much because just about ANYthing is better than that awful spinner, now let’s just hope Cena doesn’t bring it back when he wins the title again.

What are your thoughts on the new WWE Title belt?  Do you like the new design or prefer something more old school?  Do you agree the spinner should never (EVER) be seen again?